Adapted from "Portland Names and Neighborhoods: Their Historic Origins" by Eugene E. Snyder, 1979 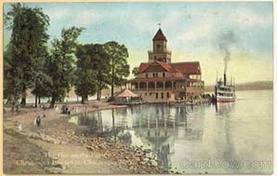 Chautauqua Boulevard
Many street names in the original university park neighborhood, including Chautauqua (pronounced shuh-tawk-wuh) were named by the Methodist Episcopal Church after the institution purchased the land from pioneer families. Church officials chose street names in remembrance not only of institutions of higher learning but also persons and places important to Methodists of the time.

On the shore of Lake Chautauqua, New York, in the summer of 1874, Dr. John H. Vincent, a Bishop of the Methodist Church, founded the Chautauqua movement. It started as a series of learning assemblies in an outdoor summer school format, which included Bible study and Greek and English literature. The movement later grew into a system of popular education and became a great American tradition in a time when public education financed by taxes was far less widespread than it is today. Private education, usually by church organizations, was of major importance for youth and adults alike. "Chautauqua" brought entertainment and culture to whole communities throughout rural America, with speakers, teachers, musicians, preachers, and specialists of the day. Former U.S. President Theodore Roosevelt was quoted as saying that Chautauqua is "the most American thing in America".
Lombard Street
Benjamin M. Lombard was active in real estate development around the turn of the century, and this North Portland street was named for him in 1909. He was one of the owners of land platted by the "Jefferson Street" subdivision of 1890. He was secretary of Fulton Park Land co., whcih platted "Burlingame" in 1910.
Welcome | About Us | Get Involved | Columbia Cottage | Calendar | Projects | Newsletter | Contact